Compare Acumatica vs. NetSuite: Where the Rubber Meets the Road 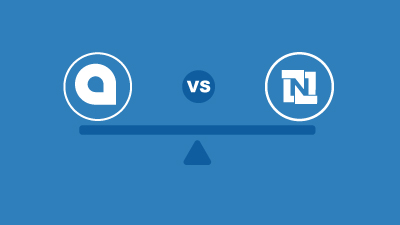 When it comes to ERP, tiny differences matter, because after three, five, or ten years, everything adds up. Especially in today’s ERP market, where products appear similar, being able to uncover some minute difference before you sign could save you thousands or tens of thousands of dollars—if not more.

So what happens when you are looking at two products and notice the following:

Cloud 9 ERP Solutions has worked with enough companies to know that Acumatica and Oracle NetSuite are likely to appear as frontrunners, finding their way onto nearly every ERP shortlist. Like our example below however, even if two products seem similar, the differences can become overwhelming.

When the Similarities End: The Vehicle That Killed Pontiac and Saved Buick

Do you remember the Pontiac Aztek? Slapped with the worst car of all time label by automotive marketplace Edmunds, the Aztek will be remembered as the vehicle in Breaking Bad used to sum up protagonist Walter White’s pre-show existence. However, despite being panned by critics the public, and even execs at GM as an “angry kitchen appliance,” this vehicle wasn’t as bad as many make it out to be.

In fact, the Aztek had one of the highest Customer Satisfaction Index ratings in its class and received the highest or second highest score in J.D. Power’s Automotive Performance, Execution and Layout (APEAL) Study—except for one category.

You may remember another vehicle that came out after the Aztek. The specs were nearly identical. The shape of the body was similar. The two vehicles were even built in the same place. For GM, the Buick Rendezvous nearly doubled the forecasted numbers and made back the money the Aztek lost.

The Aztek could have been a success—even those who criticize it refer to it as a useful, competent crossover. Had a few things been different (namely the… exterior), Pontiac might still be in business today.

The Lesson: Two Remarkably Similar Products. Only One for You.

Acumatica vs. NetSuite: Where Acumatica Stands Out

You can’t argue that NetSuite was the first ERP released in the cloud—they might even be the first cloud solution, allegedly beating Salesforce by a couple weeks or months. At this point, nearly every option stable enough for your consideration has been around for more than a decade. As you’ll learn, there are many ways that Acumatica stands above the competition—all the way from deployment to departure. 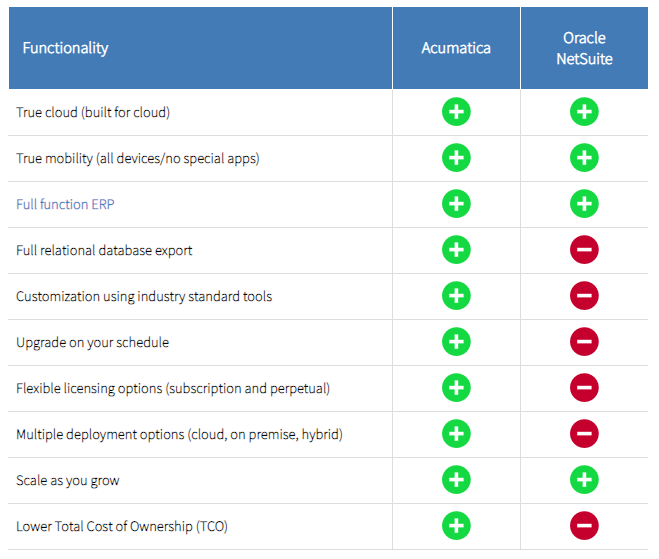 Deploy It Your Way

The cloud has changed the way businesses work, but sometimes, you can’t go all-in. Acumatica delivers a modern application built for the cloud and mobile—but with Acumatica, you get the option of SaaS, hosted, or on-premises implementation. Whether you don’t have reliable internet access, need to keep data separate for regulatory needs, or want your own instance, you’re free to get what you want.

You choose where to start and always have the flexibility to move to another deployment option when your business needs change.

This flexibility to deploy on your terms is unmatched—not only by NetSuite, but by the entire industry.

Acumatica is built on familiar and stable industry standard languages C# and .NET. Pair this with standard Microsoft development tools and open APIs, including web service standards such as Python, Ruby on Rails, and Json and you realize that if you need something done, you can most likely find someone at your organization who knows how.

Have you ever gotten an amazing discount on a year of cable TV—only to see the costs double after the promotion ends? Every cable box now costs money, you’re paying an extra $30 for HD channels, and the package you had jumped in price. And so begins the annual process of calling them, threatening to cancel, spending an hour on hold, and ultimately getting your price cut.

Unlike NetSuite, Acumatica charges by resources used, allowing unlimited users, and guarantees no more than a 3% price increase per year if necessary. This allows you to more accurately forecast how much your ERP solution will cost.

No one walks into a relationship planning an exit strategy. However, when it comes to software—even software built in the cloud to continue delivering upgrades—it’s nice to know that you can leave when you want.

One of the dirty little secrets in the software industry? With many vendors, if you decide it’s time to part ways, you’re likely going to get stuck with one last bill.

Oracle NetSuite stuck with the trend. Users cannot directly export their data in a relational format, making it difficult and costly to migrate their data. At best, you get a CSV export. Does it include everything? No.

Acumatica will never hold your data hostage – providing both a built-in automated backup service plus a unique snapshot feature, allowing you to have a fully relational copy of your data at any time.

It’s Not Sweet When Reality Sets In

Just as GM had predicted incredible success for the Pontiac Aztek, many companies walk into a NetSuite implementation with high hopes—only for reality to set in.

GM execs knew they had a failure the minute they heard the audience gasp as the vehicle was unveiled.

Sadly, you don’t get the swift backlash. The realization is more nuanced.

Whether NetSuite left with a bitter taste in your mouth like J. Goodin, you are currently comparing the two like Shoebacca or Soundcast were, or are just looking at your options, there are many reasons that companies like yours choose Acumatica.

At Cloud 9 ERP Solutions, we know Acumatica and believe in its transformative effects on businesses. Better yet, as an exclusive Acumatica Partner, we believe firmly in the product—so firmly that we stake our entire business on Acumatica alone. Click here to schedule a free evaluation of your business and operations or to learn more. We’d like to get you on the right Cloud ERP path with Acumatica! Learn more by watching our Acumatica Demo. 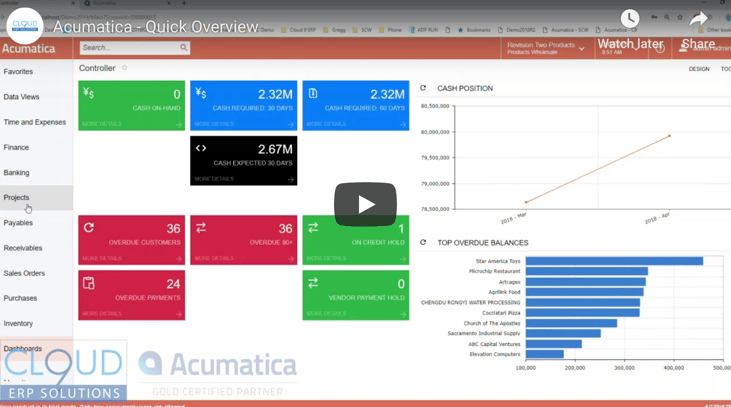 Cloud ERP - One Software to Run Your Entire Business